The Coalition for Canceled Priests believe in the Catholic Church’s traditional teachings on faith and morals and acknowledges that the Catholic Church has, since its founding by our Lord and Savior Jesus Christ, had a universal mission to bring each individual to sanctity and ultimate salvation.

What is a Canceled Priest?

“This is the question I get asked the most by Catholics unfamiliar with cancel culture. To be honest, I find it surprising amidst the rash of cancelation in various forms that there is still so much confusion – especially after so many bishops closed churches due to Covid and made it seem as if the source and summit of our faith was not essential. While traditional Catholics are typically familiar with being pushed to the wayside both in society and by the hierarchy of the Church, many of the faithful attending the Novus Ordo Missae are just realizing the gravity of the problem faced by orthodox Catholic priests. So how do we help our fellow faithful Catholics understand what’s happening and what they can do about it? This article offers some critical context and explains what the Coalition for Canceled Priests (CFCP) is doing in response…

Fitting the definition of a canceled priest into a thirty second soundbite or a short paragraph is not easy. In fact, there are many terms and phrases used, such as “sidelined,” “white martyrdom,” and “sent to the farm.” When a group of devout Catholics came together to form the Coalition this past Spring, it was decided that “canceled” is the best way to describe what is happening since the term is so pervasive and generally recognized. The Church is increasingly divided between those who seek to accommodate modern society by adapting to it, and those who stand true to the faith and seek to convert the world. Modernist bishops seeking “unity” with the ever-evolving trends have quietly been removing priests who do not seek to accommodate, but rather to continue the traditional mission of the Church of bringing about the reign of Christ our King.

First, let’s be clear what a canceled priest is not: he is not a priest who’s committed a serious crime or canonical delict. There have been priests guilty of serious crimes and rightly removed, but they do not fall into the category of “canceled” as their removal was due to offenses they actually committed, not due to countering sinful society. It must be noted that guilty or not guilty, priests like everyone else deserve due process of law (both civil and canonical). They have a right to a defense, the presumption of innocence until proven guilty, and support in the way of housing and sustenance, from the diocese or religious order in which they are incardinated.

Each canceled priest has a unique story, though there are certain patterns and similarities which seem to arise. Canceled priests are those who are being targeted by superiors and who are not afraid to stand up for the Faith no matter how “counter-cultural” it might be. He exudes reverence during the Holy Sacrifice of the Mass and may celebrate the Traditional Latin Mass or simply be favorable toward it even if he does not know Latin. He loves hearing confessions and pastoral work, in general. He wants to improve his own education and grow in his vocation, realizing that his seminary formation and education was deficient.

Above all, a canceled priest wants to help others get to Heaven, and the cura animarum sustains him and gives him strength to carry on. One of the biggest problems in the clergy today is careerism. Many good men fall victim to the “go along to get along” mentality. Being “pastoral” is no longer seen by many bishops as self-sacrifice for the well-being of souls, but rather, not rocking the boat. So often seminarians and young priests are told that the best priest is one with the fewest complaints, does the most social outreach, and focuses on culture concerns of today such as environmental work and social action. Meanwhile, the priest who focuses most on the Church’s spiritual mission, and thus on the Sacraments, is running counter to our materialist culture and the chanceries that have succumbed to it.

A canceled priest may or may not still have his faculties to celebrate the Sacraments publicly. Those with their faculties usually have no assignment and are designated to live in “approved housing” – many times with priests that are guilty of a serious crime. These priests try to help where they can in their diocese but often know that pastors have been advised not to use them. If they try to find pastoral work outside of their respective diocese, they are not given a “letter of good standing.” Sadly, a celebret, which is usually a credit card-sized document issued yearly that priests carry in their wallet stating they are good standing, is no longer given out. Many dioceses now require a letter of good standing that is less than thirty days old for all priests.

If a canceled priest does not have his faculties, it is usually done in one of two ways. The first is canonical suspension a divinis. Many bishops do not choose this route since it requires a canonical trial which the bishop might lose. For the last several years, many bishops, including my own, opt for “administrative leave in a non-penal, non-judicial way.” Sadly, that is not a spelling mistake. It is the actual language used in the decree against me, and I have encountered many priests across the country who have been canceled with the exact same wording. In plain language, this is the bishop side-stepping Canon Law. If the priest wants to appeal this type of decree, the priest may initiate a hierarchical recourse to the Congregation of Clergy in Rome.

Unlike a canonical trial, the priest is not granted discovery, so the bishop may send the Congregation information that the priest and his canon lawyer (if he can afford one) are not privy to. Many of us have discovered that Rome does not even require evidence from the bishop. The Congregation just assumes that whatever the bishop is stating is true. This is learned by the priest when the Congregation issues its ruling, which tends to highly favor bishops in its rulings. The priest’s one last recourse if he loses this ruling is with the Apostolic Signatura, the Vatican’s supreme court. This is an expensive endeavor which takes years. The priest is obligated to find a canon lawyer approved by the Signatura to argue in front of it. This is a small group of mostly Italians. Rarely does the Signatura reverse a decree by the Congregation.

Many bishops know that they have free rein on removing priests they simply do not care for. In the decree for my case, the Congregation of Clergy basically stated that a bishop has the right to remove a priest for any or no reason at all with the caveat that it is only temporary, without defining what temporary means.

The Coalition for Canceled Priests (CFCP) has been formed to counter the injustice being perpetrated on priests across the country so that they may receive due process of law, spiritual and material support, and the benefit of knowing they are not alone. Our full mission statement, eligibility criteria, types of support and other insights may be found on our website. Practically, we want to make sure a recently canceled priest is able to make ends meet, know his rights, and connect him with a good canon lawyer and if need be, an attorney. While a bishop has the full use of diocesan stewardship to pay for lawyers, a priest who was just removed with his pay cut usually does not. We want to make sure he has a decent place to live and fraternal support. To date the CFCP is in the process of helping over a dozen priests across the country to address legal needs, medical expenses, and every-day items such as tires for a car.

The second question I am usually asked by Catholics is this: What can we do to help? While this is not surprising, it is always a pleasure to hear. First and foremost, please pray and fast for canceled priests, who number in the hundreds if not the thousands across the United States. Second, if you know a priest who is canceled, please let him know that your support is available. Finally, if you want to help the mission of the Coalition, please visit our website for more information. So far, we have held two major events with excellent Catholic speakers and conducted numerous interviews to raise awareness and support. Please keep canceled priests in your fasting and prayer intentions.”

ARE YOU A CANCELED PRIEST, BISHOP, OR RELIGIOUS?

Holy and faithful priests, bishops, and religious have been persecuted in many ways throughout the history of The Church. The cancel culture that has affected many of us in the recent past has been present in The Church for quite a while. We have met faithful men and women who have been sidelined or canceled in many ways in The Church. We’re not talking about people who have been removed from ministry for violating civil law or Canon Law. We’re talking about people (priests in particular) who are striving to be holy, faithful, traditional, and orthodox.

If you feel you have been canceled in a way that affects your ability to live out your vocation, we encourage you to apply for support from The Coalition for Canceled Priests.

APPLY FOR CFCP SUPPORT
CONSULT WITH CFCP WITHOUT APPLYING FOR SUPPORT 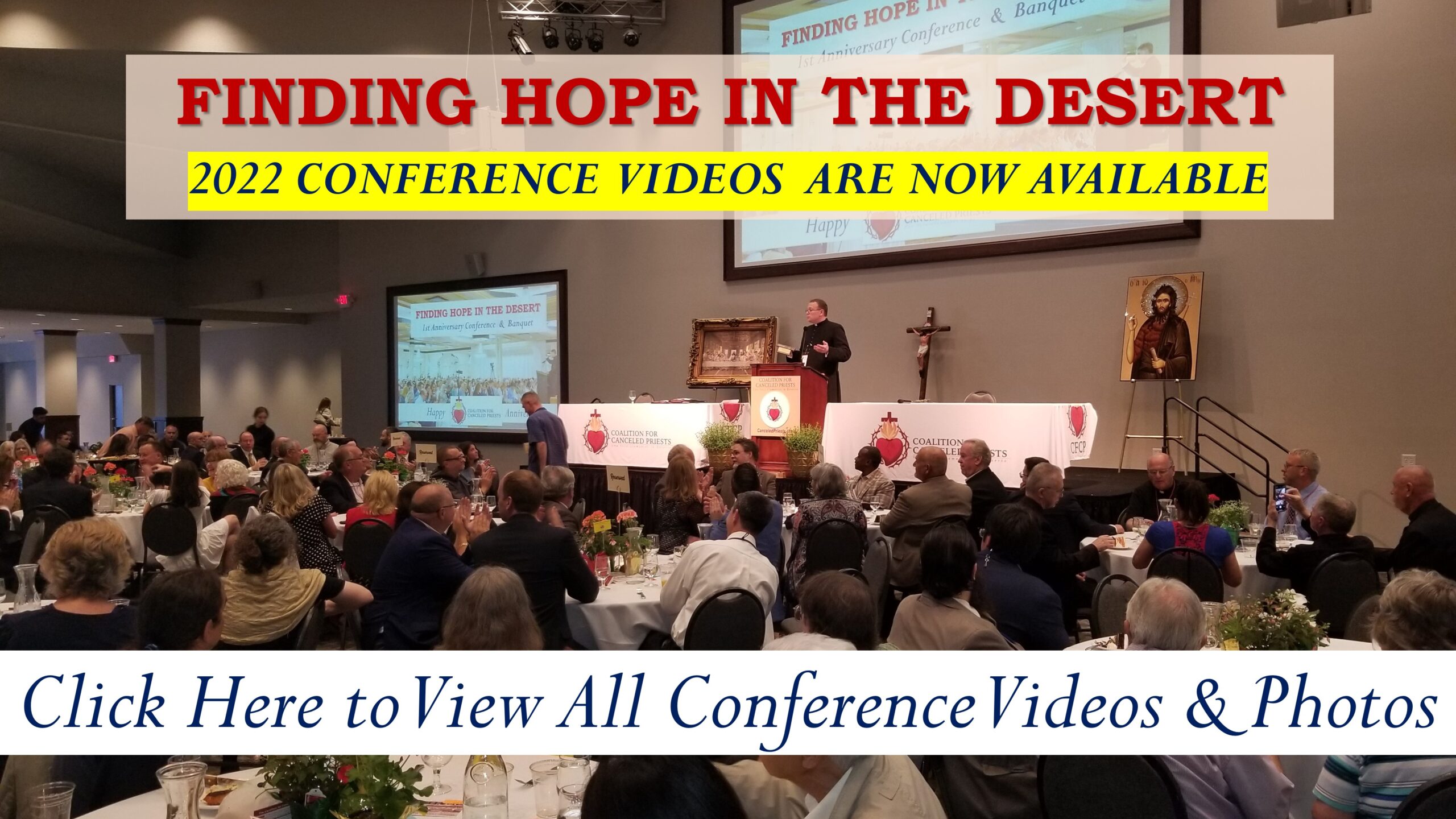